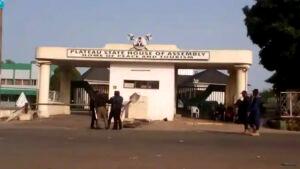 Unidentified people have vandalized the complex of the Plateau State House of Assembly, destroying property worth yet to be ascertained sum of Naira.

This is even as the Yakubu Sanda faction held plenary despite the destruction that took place in the chamber.

Vanguard visited the complex which has broken glasses, upturned furniture, and destroyed air conditioners, among other items littering the floor.

At an emergency plenary held a few minutes past noon, 12 members including the factional Speaker, Yakubu Sanda were in attendance.

Sanda who presided over the plenary in 25 minutes said he had among other items on the Order Paper, the screening of the Chairman and members of Plateau State Independent Electoral Commission, PLASIEC, as communicated to them by the State Governor, Simon Lalong as well as the consideration of the 2022 appropriation bill.

Before the discussion, the Majority Leader, Naanlong Daniel said he “received an…