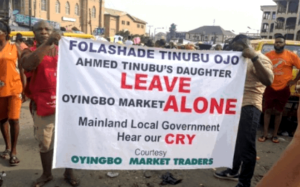 They were protesting two weeks closure of the market by market authorities in the state.

The market which has been in existence for decades was shut down about two weeks ago over non compliance with environmental rules.

It is one of the oldest markets in Lagos which was transformed into an ultra modern market by former Governor of Lagos State, Babatunde Fashola.

Many road users were stranded for hours as Oyingbo and its environ were shut down by the traders’ protest.

Traffic gridlock stretched from Lagos Mainland to Idumota, Iddo, Idumagbo, Yaba,  Ijora and Otto to mention but a few as many road users were denied access to various locations.

Many passengers disembarked from various vehicles and resorted to trekking.