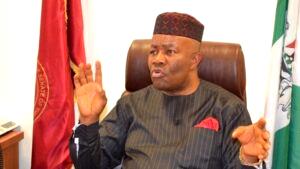 ABUJA–THE National Youth Council of Nigeria,NYCN, has urged the Minister of Niger Delta Affairs, Sen. Godswil Akpabio not to allow himself to be distracted from pursuing the reforms in the Niger Delta Development Commission,NDDC.

The group said the benefits of the reforms are being felt by the people of the region as reflected in the peace being enjoyed in the region today.

The NYCN in a statement, signed by its President, Solomon Adodo, said allegations by critics of the minister that he passed the buck on his responsibility for the constitution of NDDC Board,urged the minister to follow due process and not be intimidated by those who are rattled by the ongoing reforms at the NDDC.

It would be recalled that a group, Niger Delta Peoples Forum had issued a statement entitled, ‘NDDC Board: ‘Akpabio is responsible…