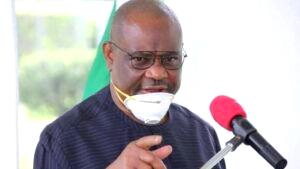 GOVERNOR Nyesom Wike has revoked the kingship of Victor Worluchem as Eze Epara Rebisi XII, Port Harcourt, Rivers state, switching the Certificate of Recognition and Staff of Office to Eze Barr. Uchechukwu Isaiah Elikwu as valid occupant of the stool.

Wike, presenting both instruments of authority to the new Rebisi at the Government House, Port Harcourt, Wednesday, said he acted in obedience to a court judgment.

The governor explained that when he assumed office 2015, Victor Worluchem was the occupant of the stool recognised by his predecessor amidst court dispute over the coveted First Class stool in Port Harcourt City Local Government Area.

He stated, “As the 9th defendants in the case, the court directed thay not only should we (Rivers Government) recognise the Plaintiff (Uchechukwu Elikwu) as the Eze Epara Rebisi, but we should go ahead and revoke the recognition…