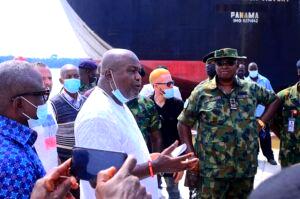 The special project director, Trans Warri Ode-Itsekiri Bridges, and access road Chief Otimeyin Adams has commended the Delta State Government under the leadership of Dr. Ifeanyi Okowa for paying the sum of 8BN out of the 9BN debt burden inherited from the previous administration for the project.

Adams stated this while receiving the Participants of Senior Course 44 of the Armed Forces Command and Staff College, Jaji led by their Team Leader, Air Commodore C. O. Obiabaka at Setraco yard, Ifie-Warri.

Adams while explaining the socio-economic benefits of the Trans Warri Ode Itsekiri bridges and access road stated that the scope of the project includes the construction of 26km length of road with the spur, culverts, drains, and 19 bridges of various spans including Ode-Itsekiri internal Roads and two jetties on both sides of Warri Rivers. The main alignment for Ubeji is…