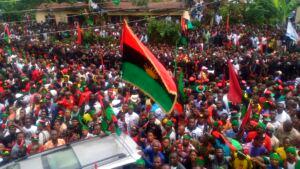 The Indigenous People of Biafra, IPOB, has warned unknown gunmen killing innocent people in the South East to desist forth with.

However, barely 24 hours after President Muhammadu Buhari’s pledge to consider request by Igbo leaders for unconditional release of Nnamdi Kanu, leader of the outlawed Indigenous People of Biafra (IPOB), currently standing trial, IPOB had vowed to wage war against gunmen killing and maiming people in the South East zone of the country.

Buhari had in the week under review, made the pledge when he received a group under the aegis of Highly Respected Igbo Greats, led by First Republic parliamentarian and Minister of Aviation, Chief Mbazulike Amaechi, at State House, Abuja, on Friday.

The president, who believed that the request runs contrary to the doctrine of separation of powers between the Executive and Judiciary, however, told the 93-year-old statesman:

“You’ve made an extremely difficult demand on me as leader of this country….