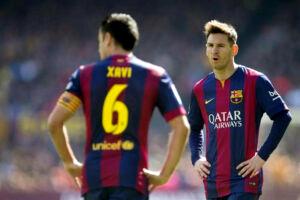 It was Xavi’s first match as Barcelona’s coach. And he won against a fearless Espanyol team. 830 kilometres away in Paris, The Flea, Messi, opened his Ligue 1 goal account in Paris St. Germaine’s 3-1 win over Nantes.

Lionel Messi’s first Ligue 1 goal came in the 87th minute, with an assist from Mbappe to seal an emphatic win despite Keylor Navas getting sent off in the 65th minute.

Second minute, Mbappe had scored, with a deflection that wrong-footed Alban Lafont.

Messi sent in a through ball only for Dennis Appiah to deflect it over the hapless goalkeeper.

The Argentine then registered his first Ligue 1 goal with long-range strike.

Everyone had been waiting for this moment for since August.

At Camp Nou, there were flashes of the glorious Barcelona days.

Xavi’s boys strung passes that used to leave opponents breathless. They sprung counter-attacks that used to send fans jubilating even before…