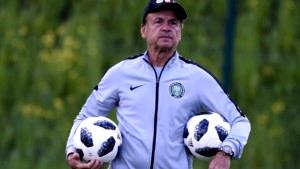 The fate of Super Eagles coach, Gernot Rohr has been sealed. A top official of the Nigeria Football Federation told Sports Vanguard Friday that the football house was ready to pull the strings and see to the termination of Rohr’s contract.

“Rohr is gone,” our source continued, adding, “the decision has been made, what is left now is how to get his replacement without delay.”

The process to sack Rohr commenced on the evening of Tuesday, November 16, soon after the final group match of the Qatar 2022 FIFA World Cup qualifier between the Super Eagles and the Blue Sharks of Cape Verde. Although the encounter ended 1-1, with the Eagles securing qualification for the playoff in March, the performance of the team was nothing to write home about. Most fans at the Teslim Balogun Stadium were left wondering whether Rohr was the right man to lead the Super Eagles to her fourth continental title and a ticket…