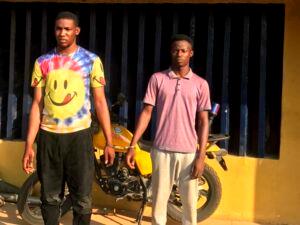 Two suspected members of Eiye cult group were on Friday 19th of November, 2021 arrested by men of Ogun State Police command, for forcefully initiating a student into their group.

The suspects, according to a statement by the command’s spokesman, Abimbola Oyeyemi, are; Owoseni Gbemisola and Ogunsola Ayo. They were arrested following a report by a 21 years old student of Olabisi Onabanjo University (name withheld), who reported at Ago Iwoye divisional headquarters that he was lured to Ijebu Igbo by one Yemi Justice (aka JP) under the pretence of going for a job.

He said, on getting to Ijebu Igbo, Yemi alongside Owoseni Gbemisola and Ogunsola Ayo blindfolded him, beat him and forced him to be initiated into Eiye confraternity.

Oyeyemi added that, “upon the report, the DPO Ago Iwoye division, SP Noah Adekanye, detailed his detectives to go after the suspects and bring them to book”.