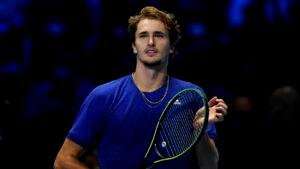 Alexander Zverev beat Novak Djokovic 7-6(4), 4-6, 6-3  on Saturday at the Nitto ATP Finals to set up a final showdown with Daniil Medvedev in Turin.

The German, who beat Djokovic in the 2018 season finale championship match, played bravely and hit with great depth in the crucial moments against the Serbian. Zverev saved a set point in the first set and closed the net effectively throughout to advance after two hours and 29 minutes in an entertaining match.

The 24-year-old engaged with the fans inside the Pala Alpitour and hit 35 winners to reduce his ATP Head2Head series deficit to 4-7 against the World No. 1.

“Every time we play it takes hours,” Zverev said in his on-court interview. “I have not spent more time on court with anybody other than him this year. I am happy with the win and happy to be in the final here and to give myself the best chance for tomorrow.”

With his victory, Zverev avenged his US Open semi-final defeat to Djokovic. It is…