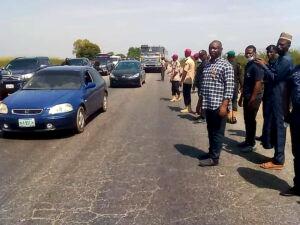 The Kaduna State Government has received briefings from security forces on Sunday’s attack by armed bandits along the Kaduna-Abuja road.

The Commissioner of Police, Abdullahi Mudassiru, alongside the Garrison Commander, One Division Nigerian Army, Brigadier General UT Opune, and the representative of the State Director, Department of State Services, Mr Garba Shehu Shinkafi led other security agencies to the location at Kurmin Kare, Kachia LGA, where the bandits carried out the attack which left one person dead and an unspecified number kidnapped.

The Commissioner of Police also informed the Commissioner, Internal Security and Home Affairs, Samuel Aruwan, that 11 citizens were rescued while one person, Alhaji Muhammad Sagir Hamidu, Chairman and CEO of Famaks British School, lost his life.

The vehicle used by Alhaji Sagir Hamidu who was killed during the attack ,was recovered…