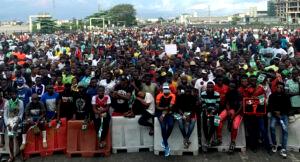 The Lagos State Union UK & Ireland, has commended Governor Babajide Sanwo-Olu of Lagos for his uprightness towards the outcome of the panel set up to investigate the gruesome killings of innocent youths during the #EndSARS protest at Lekki tollgate.

In a statement, the Union’s Publicity Secretary, Kayode Ajayi noted that the action of Governor Sanwo-Olu towards the panel report, showed that he is a man with conscience and plight for the youths.

“We are solidly behind our Governor. He has demonstrated exemplary leadership by selecting men and women of good conscience as members of the panel and the panel has done well by exposing the atrocities of the Federal Government towards the masses particularly the youths.

“We want to assure our Governor that Lagosians are with him on this and must resist any form of intimidation or threat that may arise from any quarters.