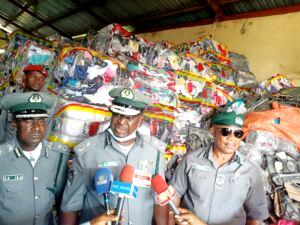 The FOUC’s Public Relations Officer, PRO, Jerry Attah, disclosed this in a statement to newsmen in Owerri.

Customs said the items were seized along the road of Umuikaa/Aba, Okada/Benin, Benin/Auchi and Enugu/Ubollo, adding that it was part of the effort of the FOUC, to stop smuggling.

According to Customs, “Other seized items to include eight other vehicles worth N158,734,742million and 294 bags of foreign parboiled rice concealed with RC minerals worth N11,760,000million.