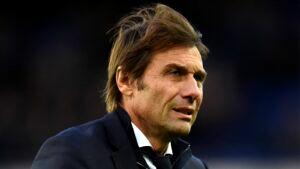 Antonio Conte suffered his first defeat as coach of Tottenham when his side were surprisingly beaten 2-1 by Slovenian club NS Mura on Thursday in the UEFA Europa Conference League.

Just the fourth game since Conte took over the reigns at the London club, Tottenham replicated the inconsistency that has led to them having three coaches since the departure of Mauricio Pochettino in 2019.

Tottenham went behind as early as the 11th minute and drew level through Harry Kane who has struggled to find the back of the net since his failed move to Manchester City.

By the time Mura scored the winner deep in stoppage time, Spurs had just ten men on the field of play after Ryan Sessegnon was sent off in the first half for two bookable offences.

With just one game left, French side, Rennes has an unassailble lead which means Tottenham will go into the play-off against one of…