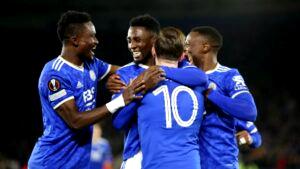 Midfield enforcer, Wilfred Ndidi was on song as Leicester City brushed aside Legia Warsaw 3-1 on Thursday in the UEFA Europa League.

The goal was Ndidi’s first of the season who only recently returned from an injury lay-off.

His goal in the 33rd minute wrapped up an impressive performance by the Foxes who now top Group C with 8 points heading into the final matchday.

Fellow Nigerian, Kelechi Iheanacho tasted only five minutes of action coming on as a replacement for Zambia’s Patson Daka.

Victor Osimhen’s Napoli who are also in Group C lost 2-1 to Spartak Moscow on Wednesday and risk missing out on qualification to the next round as they currently occupy the third position.