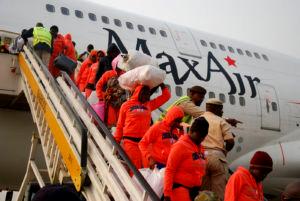 *As another batch of 172 Libya returnees arrive Nigeria

One of the 172 returnees brought to Lagos early, yesterday, from Libya, Omoniyi Azizat, has expressed regret for deceiving her father to raise N800,000 for her botched trip to Libya.

The airlift of the 172 persons arrived the Murtala Muhammad International Airport, Lagos.

Recounting her experience in Libya, the 21-year-old Azizat from Lagos said all her hope was that Libya would be like London.

She said: “From my father’s custody, a friend convinced me to meet her in Ibadan where I was introduced to the idea of travelling to Libya where I was told that I could work and receive a monthly salary of N120,000.

“I deceived my father that I wanted to establish a business and he gave me N800,000, but I used it for the Libyan trip through the desert.

“I became a slave and prostitute in Libya; I am not lying, I raised equivalent of…