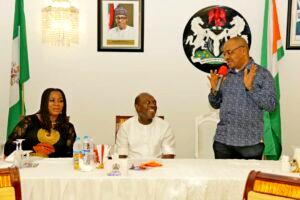 Governor Udom Emmanuel has commended the ongoing reforms of the Nigeria National Petroleum Corporation (NNPC) and its recent restructuring to transform the corporation into a commercially viable company that will provide reliable products supplies within the country.

Udom  who expressed appreciation to the Management of NNPC Upstream, for choosing Akwa Ibom State as venue for its 3- day retreat, applauded their initiative towards making the Corporation a Limited Liability Company, urging them to brace up for the task ahead of the new responsibilities.