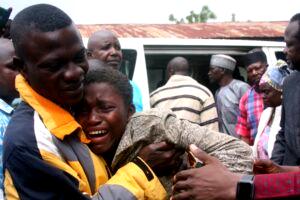 Of the four students of Bethel Baptist High School, Kaduna, still with their kidnappers, one, the school’s Head Boy, who had refused to leave, has come home.

Since, the kidnappers have been collecting ransoms and releasing the captives in bacthes.

However, the Head Boy had refused to join those coming home, stating that as long as a student was still in captivity, he won’t come home.

But he fell ill and the bandits ask for N5 million ransom. It was paid and the boy came home, now taking treatment.