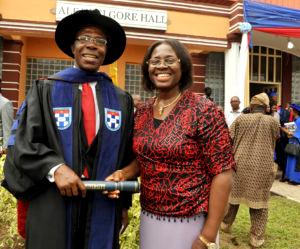 President Muhammadu Buhari has commiserated with the Founder and Chief Executive Officer of Coscharis Group, Dr. Cosmas Maduka, over the passing of his wife, Charity, urging prayers for the family at the trying period.

In a condolence message released by his spokesman, Mr Femi Adesina, on Monday, in Abuja, President Buhari, joined friends and associates of the Maduka family and business group in mourning Mrs Maduka.

He noted that the deceased, who was the Vice President of Coscharis Group, demonstrated virtues in managing her home and businesses effectively.

The President also acknowledged the strength and contributions of the matriarch to the Maduka dynasty and country at large.

He said she worked as a “professional teacher,…