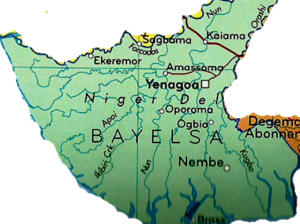 A mother and her two children were on Sunday evening severely injured after a gas explosion occurred in their residence along the Azikoro Road in Ekeki suburb of Yenagoa, the capital of Bayelsa state.

It was gathered that the children between the ages of 6 and 8 were with their mother at about 6.30 pm when the explosion occurred from their kitchen.

According to a source, the victims were home awaiting the arrival of their breadwinner, said to be a commercial Keke Napep operator from Kogi State.

The source said: “When the odour of the gas leakage was perceived, the woman left the children to switch on a torchlight to check the leakage.

“What was heard next was a huge explosion which threw open their iron door and shook the entire building.

“The 6-year-old boy was severely burnt because he was lying down naked when the explosion occurred.