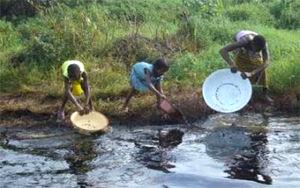 The Federal Government, on Monday, urged leaders of the Ogoni community and other relevant stakeholders to expedite action on the ongoing clean-up exercise in the area.

Minister of State for Environment, Chief Sharon Ikeazor, said this at a stakeholders’ meeting and inspection tour of Ogoniland in Khana Local Government Area of River.

Ikeazor, while responding to some of the leaders, who spoke on behalf of the community, said that the commitment of the leaders and stakeholders would help in speeding up the implementation of the project.

While promising to address some of the concerns of the communities, she, however, called for their cooperation with the Hydrocarbon Pollution Remediation Project (HYPREP) for the progress of the work.

The minister said that the meeting was aimed at interacting with all the communities making up Ogoniland.

“You have all expressed your concerns about the delay in the project. I appreciate the concern, but how can we work…