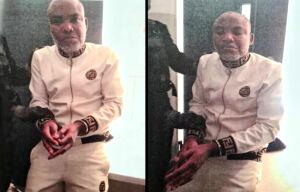 Mr Ifeanyi Ejiofor, lead counsel to the detained leader of the Indigenous People of Biafra, IPOB, Nnamdi Kanu, on Tuesday, berated the Department of State Services, DSS, for granting a former Governor of Abia State, Orji Uzor Kalu, private access to his client in detention.

Ejiofor, who described Kalu’s visit to his client as “bizarre and unusual”, maintained that it was in gross violation of the court-ordered guideline for visitation.

He alleged that the DSS gave the erstwhile governor access to the IPOB leader before the time scheduled for a formal visit.

It will be recalled that Kalu, who piloted affairs of Abia State from 1999 to 2007, had in his post that went viral on social media on Monday, revealed that he paid a visit to the IPOB leader at the DSS detention facility.

Kalu, who is currently the Chief Whip of the Senate, in the said post, noted that he was the one that made Kanu’s father, Eze Israel…