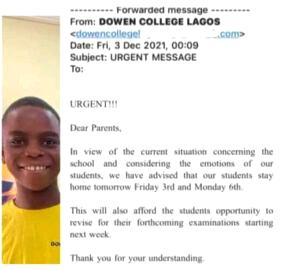 The Ijaw Youth Council, IYC, has joined other Nigerians to demand justice for the 12 years old student of Dowen College, Lagos, Sylvester Oromoni Jnr who died from the injuries he sustained from being bullied in the school by other students.

IYC expressed shock and condemned the incident in strong terms.

In a statement signed by the group’s National Spokesman, Comr. Ebilade Ekerefe, the Ijaw Youth Council commiserated with the family and commended the general public for joining voices to demand for justice for the student.

The statement reads thus: “The umbrella body of Ijaw Youths worldwide, the Ijaw Youths Council (IYC) has watched with awe and shock the reported circumstances surrounding the death of a 12-year-old student of Dowen College in Lagos, Sylvester Oromoni Jnr.

We have read to our chagrin that the late Oromoni was indeed the latest victim of bully and harrowing assaults by fellow students.

The supposed injuries from the beatings led to his death,…