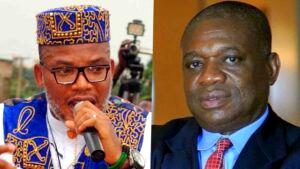 The Indigenous People of Biafra, IPOB, lead counsel, Ifeanyi Ejiofor, on Saturday alleged that the operatives of the Director of Security Services, DSS, delayed the IPOB’s lawyers from seeing the IPOB leader, Nnamdi Kanu just for the former governor of Abia State, Orji Uzor Kalu, to have suspected private meeting with him (IPOB leader).

The IPOB’s lawyer disclosed this in a statement obtained by Vanguard in Owerri.

He said it was the genesis of the war of words that has been on between the former governor and the IPOB’s legal team.

On how the name of the former governor entered into the visitor’s list to DSS headquarters, he told Vanguard; “On or about 11 am on the 29th of November, 2021, I received a phone call from a reliable source. The latter informed me that a certain Orji Uzor Kalu expressed a desire to see my client, Onyendu Mazi Nnamdi Kanu.

“The intended visit was ostensibly in further pursuit of the political…