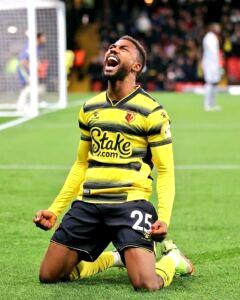 Red-hot Watford striker, Emmanuel Bonaventure Dennis, has come  out  to swiftly deny media reports quoting him to have said that he would shun any invitation to play fot Nigeria at the prestigious African Cup of Nations tournament, kicking off next month in Cameroon.

Emmanuel Dennis, who was voted Watford player of the.month of November after scoring six goals and providing five assists in 13 Premier League appearances for Watford this season, was reported in a Nigerian online portal, owngoalnigeria.com, tp have told officials of the Nigeria Football Federation that he was not ready tp play for the Super Eagles at Africa’s flagship tournament the 2022 AFCON.

In a swift reaction to the report , Emmanuel Dennis, who is in his first season in the exciting and very competitive English Premier League and has been holding his own against some of the best and talented players in world football, debunked the  report by owngoalnigeria.com, adding that he never…