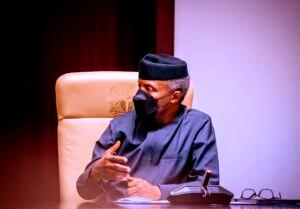 Vice President Yemi Osinbajo, says Nigeria needs not just achievers, but men and women who are bridge builders and unifiers.

The vice president said the nation needs people who will see its ethnic diversity as a source of strength, and not as a point of difference.

Osinbajo’s spokesman, Laolu Akande, in a statement on Saturday in Abuja, said the vice president spoke at the turbaning ceremony of some prominent persons in Bida Emirate, Niger State.

In Bida, the Etsu Nupe and Chairman, Niger State Council of Traditional Rulers, Alhaji  Yahaya Abubakar, in a show of goodwill and appreciation, conferred on the vice president the “Garkuwan Yamma Nupe”, which means – the Defender of Nupe Kingdom.

“I am short of words to express our gratitude to the vice president. It shows the concern you have for all Nigerians irrespective of who they are and where they come from,” Abubakar said.