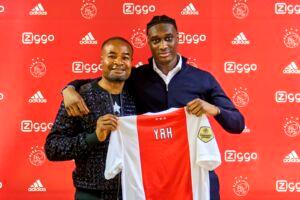 The youngster joins the Dutch champions after a fantastic and outstanding season withi Jong Ajax.

Gibson Yah, whose parents have Nigerian heritage being they hail from Edo State, is delighted to pen his first professional contract with the Dutch side, saying they are “the most beautiful club in Holland,” in a contract that will see him play for the Holland giants until June 2022 with an option for additional year.

The highly rated 18-year old midfielder joined the first team after impressing for the youth side, Jong Ajax. His progress through the ranks of the youth team to the first team has been applauded, and the yougster hopes to make use of this opportunity.

The de Godenzonen’s as Ajax are  fondly called (Sons Of…