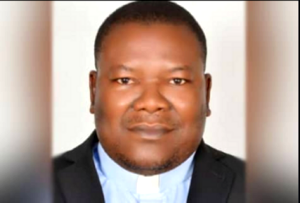 Abductors of the Catholic Priest, Rev. Fr. Joseph Ajayi, along Akure-Ikere Expressed in Ondo State have demanded N20m ransom for his release.

Recall, that the clergyman was abducted while travelling in his Toyota Corolla car, on Monday.

The cleric was travelling to Akure, the Ondo State capital from Ikere, in Ekiti State when the hoodlums attacked and abducted him.

Vanguard gathered that he’s a priest of St. Peter Clavar, Ilara Mokin in Ifedore council area of the state.

The Secretary to the bishop of the Ondo Catholic Diocese, Jude Arogundade , Rev. Fr. Victor Ibiyemi, who confirmed the incident to newsmen in Akure last night said the abductors had contacted the church demanding a sum of N20 million ransom.

Ibiyemi said that; “We are on it since morning, they ( kidnappers) have contacted the church, demanding N20million,” the cleric…