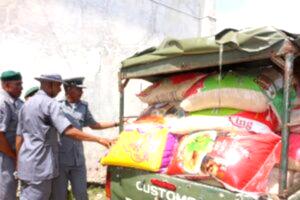 The Commanding Officer, FOB, Navy Capt. Mohammed Abu, disclosed this to newsmen in Ibaka on Tuesday when he handed over the bags of rice to the Nigeria Custom Service (NCS).

Abu said the 265 bags of rice were seized from smugglers between Nov. 26 and Nov. 29 during routine patrol operations by Nigerian Navy Ship (NNS) Thunder, commanded by Navy Capt. Christian Akokota.

He explained that the smugglers of the rice and the boats had earlier been handed over to the Nigeria Security and Civil Defence Corps (NSCDC) for further investigation and prosecution.

He said the seizure followed the directives of the Chief of Naval Staff, Vice Adm. Auwul Gambo, of zero tolerance to all forms of criminality on Nigeria…