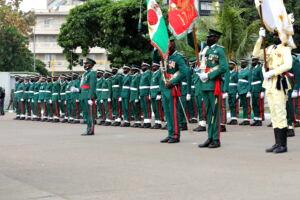 Over the weekend, the Director of Public Relations of the Nigerian Army, Brigadier General Onyema Nwachukwu, virtually rolled out the drums celebrating the command style of the present Chief of Army Staff, Lieutenant General Faruk Yahaya, which he said “has up-scaled Nigerian Army operations and enhanced its operational successes, adding that Yahaya had since assumption of duty on May 28, 2021 encapsulated his command philosophy anchored on four cardinal pillars: Professionalism, Readiness, Administration and Cooperation.

He treated us to some kinetic and non-kinetic stuffs which have become some kind of clichés, even among all kinds of civilian commentators, on the Nigerian security matters, of   which virtually everyone has understandably become an expert. According to him, the neutralisation of high profile terrorist commanders and their foot soldiers, including some of their notable commanders, such as Abubakar Shekau and Musab Al-Banarwi, has…