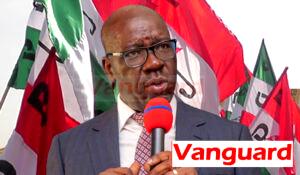 At a valedictory session held in honour of the Prince Uche Secondus-led leadership at the party’s secretariat Wednesday, the PDP denied demanding or collecting any form of financial gratification before handing Obaseki the ticket of the party to fly the flag of the PDP in September 2020 governorship election.

Speaking at the event, outgoing national publicity secretary of the party, Kola Ologbondiyan said: “Let me state without mincing words that the Governor of Edo State, Godwin Obaseki, owe the members of this NWC the responsibility of clearing our names before the public.