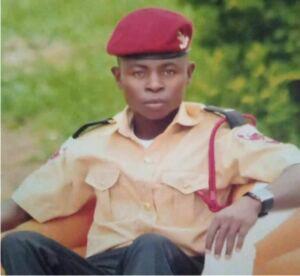 Eyewitness account said that the victim was shot at close range by the suspected killers in front of his friend’s house situated along Agbala area behind Saint Monica’s Girl Grammar School, in Ondo town.

The killers were reportedly pursuing some people and the victim was said to have prevented them hence he was shot.

A source told newsmen that “the FRSC official went visiting his friend with his wife and while he was trying to alight from his motorbike, some people ran towards him to seek refuge from those pursuing them.

“The FRSC official challenged them and instead of explaining why they were pursuing the people, one of them shot him at close range he and he died instantly.

Narrating their ordeal, the wife of the deceased, Mrs…