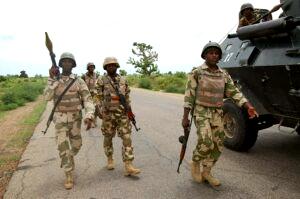 The Theatre Command, Operation Hadin Kai has denied reports claiming that several travelers along the Maiduri – Damaturu road were kidnapped Boko Haram/ISWAP terrorists in the early hours of Saturday.

A statement by Col Ado Isa, Deputy Director, Army Public Relations said the attempts by the terrorists to creste psnic among motorists on the road was foiled by troops.

He said, “Troops on mobile patrol within the general area foiled the attempt without any delay.

“There was no abduction of any commuter today. It was just the imagination of mischief makers who are not happy that peace is gradually returning to the North East.

The statement reads, “The attention of Operation Hadin Kai (OPHK) has been drawn to series of unsubstantiated reports making rounds today (Saturday), 11 December 2021 on social media and some pages of newspapers on the purported abduction of Maiduguri bound commuters by members of the Islamic State of West Africa…