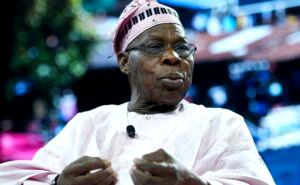 Ahead of 2023, former President Olusegun Obasanjo has warned Yoruba monarchs to steer clear of partisan politics, especially adoption of candidate for any elective political office.

Speaking at the conferment of Aare and Yeye Afurugbin Ola of the source on the Director General, International Institute of Tropical Agriculture and his wife, Dr Nterenya Sanginga and Charlotte Kurara, at the Ile-Oodua Palace, Ile-Ife, Osun State, yesterday,  Obasanjo said the strength of Yoruba race is in its diverse political views.

He urged Yoruba monarchs to play fatherly role to Yoruba sons and daughters seeking political office rather than allowing themselves to be played into adopting anybody.

Obasanjo said monarchs in the region must be careful of politicians as the country heads into politicking period, saying, as traditional rulers, they must adopt every…