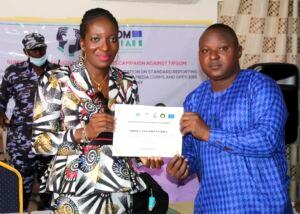 The Journalists International Forum For Migration (JIFORM) has commended the National Agency for Prohibition of Trafficking In Persons (NAPTIP) and the Fundación Internacional Para Iberoamérica de Administración yPolíticas Públicas (FIIAPP) a French agency otherwise known as International and Latin American Foundation of Administration and Public Policies) for facilitating a  three-day training and capacity development aimed at enhancing the standard of reporting template for members of the trafficking in-person media corps which ended on Friday at Keffi, Nasarawa State.

JIFORM, a media foundation comprising over 300 journalists covering migration matters across the continents with headquarters in Lagos noted the training which focused on the prevention strategy for Trafficking In Persons (TIP) and Smuggling of Migrants (SOM) under the Action Against Trafficking In Persons and Smuggling of Migrants (A-TIPSOM) project funded by the European Union…