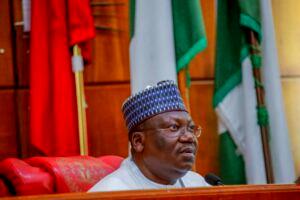 President of the Senate, Ahmad Lawan says the National Assembly required full complement of relevant institutions and agencies to deliver on its constitutional mandate.

Lawan made the remark as a guest lecturer at the first ‘Distinguished Parliamentarians Lecture Series 2021′” which was facilitated by the National Institute for Legislative and Democratic Studies (NILDS).

He spoke on “The Legislature, Legislative Mandate and the People – The Reality and the Public Perception”.

Lawan said that with the support of other institutions like National Assembly Service Commission (NASC), the job of legislation would be made easier.

The president of the senate said that the focus of the 9th assembly had been on legislations that were most likely to impact either on the democratic institutions, economy, security or the livelihood of Nigerians.