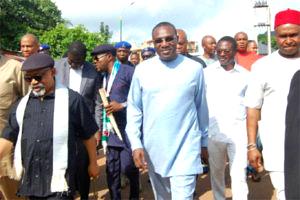 Penultimate Friday, Senators Andy Uba and Chris Ngige held parallel meetings in Abuja in their continued fight for supremacy over the All Progressives Congress, APC structure in Anambra State.

The two meetings inevitably brought to fore the polarization of the APC in the state that has won a notoriety for sullying respected persons in politics and the professions.

Despite their parallel political assertions, Uba and Ngige hold unique qualities that ordinarily should bind them together as soul mates.

Not just the fact that they are members of the APC, they are two men who served as governor of Anambra State and were dramatically sacked by the courts.

Ngige served as governor for two and half years before he was removed after much drama by the Supreme Court in 2006.