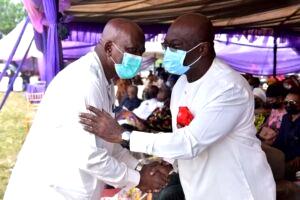 Prelate, Methodist Church Nigeria, Most Rev. Samuel Kalu Uche, has told politicians particularly South East political leaders that the vacuum created by the demise of the late Premier of the Old Eastern Region, Dr. Michael Okpara, is yet to be filled.

The Prelate who made the assertion while preaching at the funeral service for Okpara’s late wife, Lady Adanma Okpara, regretted that the present crop of political leaders are not in the mold of past patriots like Okpara and his contemporaries.

He therfore, challenged Nigerian politicians to imbibe the spirit of selflessness in leadership like Okpara did as Premier.

The cleric noted that Okpara would not have achieved the much he did if his wife, did not stand by him, describing her as “a lady of inestimable value.”

Speaking at the event, Gov. Okezie Ikpeazu of Abia State  described Lady  Okpara as ” a virtuous woman who led the women of Eastern Region to the pathway of politics”.