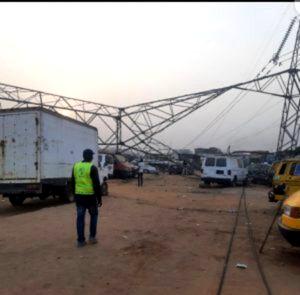 The Transmission Company of Nigeria, TCN, on Friday announced that an inferno was caused by a vandalized pipeline along Isheri Olofin, off Igbando – LASU expressway of Lagos State has caused massive damage to 330kV Ikeja-West Akangba transmission line 1, burning off a large portion of the conductor.

General Manager, Public Affairs at the TCN, Mrs Ndidi Mba said in a statement issued in Abuja that the development triggered a resistant pull on the high-tension towers along the line route causing five of them to collapse.

She explained further that the incident which is estimated to have occurred at about 00.29 in the early hours of today, burnt a wide portion of the 330kV transmission line which wheels 145MW of bulk power to the Akangba Substation.

According to her, “The transmission towers affected are the two closest to the site of the incident and three across the Lagos Canal.

“As a result of the incident, there is a major reduction of bulk…