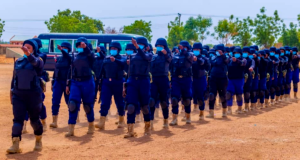 The Nigeria Security and Civil Defence Corps (NSCDC), Kwara Command, says there is no casualty in the eve of Christmas celebration gas-laden truck accident in Ilorin.

Its Spokesman, Mr Babawale Afolabi, made the clarification, while responding to newsmen enquiry on the incident in Ilorin.

The  reports that what would have been a major disaster was averted at the Unity Roundabout in Ilorin, as a moving articulated vehicle, laden with gas lost its head, leading to profuse leakage of gas.

According to Afolabi, a major tragedy was averted, as a gas-laden truck lost control and its head severed from the body, spilling its content on the major road.

He said that the truck carrying gas was trying to negotiate a roundabout at ‘A’ Division Area, of Ilorin metropolis when the incident occured.

“We received the distress call around 7.30 a.m on Dec. 24, that an articulated truck carrying gas product has crashed…