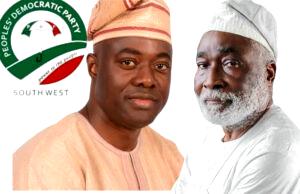 The Secretary, Peoples Democratic Party, PDP, South-West Zone, Chief Rahman Owokoniran, has described Governor Seyi Makinde of Oyo State as, among other things, a liberator, path finder and a beacon of hope and aspiration for the Yoruba nation.

The PDP scribe made the commendation in a birthday message to Governor Makinde, who was born on December 25, 1967.

According to Owokoniran, Makinde is not just adept at dealing with tough situations, his impeccable manners make his qualities shine through.

“The future belongs to great thinkers like Governor Makinde, and as I have said before, he gives hope that the youths of this great country have a lot to offer,” Owokoniran said.

In the birthday greetings, Owokoniran said “Makinde is a liberator, a pathfinder, an achiever, a unifier and a Godly man.