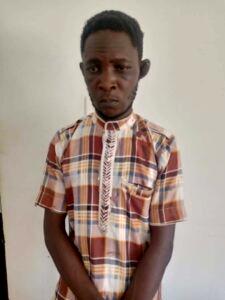 Operatives of the Intelligence Response Team, IRT, Sunday arrested a Mobile Technician who abducted a nine-year-old pupil in a private primary school in the New Nyanya area of Nasarawa  State, two weeks ago.

The suspect, Teleheem Kamaldeen, was nabbed three days after he collected N1.5 million ransom for the pupil’s release.

During interrogation, the 29-year-old suspect disclosed that it took him two months to study the boy’s movements as well as the time his parents usually went to pick him from school, before he struck.

According to him:  ” I have been monitoring him for two months, waiting for the right opportunity to abduct him.His parents live in the same area with me- New Nyanya. He was always driven  in his parents’ car ,to and from school.

” I decided to abduct him on their vacation day because  parents usually went to pick their children earlier than the usual closing hour that day.

When I got  to the school I discovered that  access…