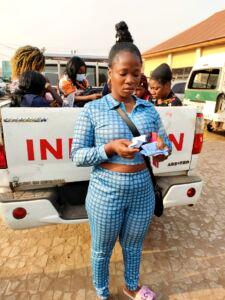 The Makurdi Zonal Command of the National Agency for the Prohibition of Trafficking in Person, NAPTIP, has arrested an alleged female trafficker(name withheld) and six of her supposed victims at a popular Makurdi motor park.

The arrest of the suspect was made known in a statement issued weekend by the Makurdi Zonal Commander of NAPTIP, Mr. Gloria Bai.

According to the statement, “the Command in the early hours of Friday, January 7, 2022, received a call from a concerned citizen from Duku Motor Part at Wurukum Makurdi, who alerted the command of a suspected case of human trafficking involving seven ladies of which one is the suspected trafficker.

“Officers of the command arrived at Duku Motor Park some few minutes after receiving the call and met the six ladies and the suspected who said they were all travelling to Lagos.

“The victims were between the ages 16 — 24 years by facial analysis. At the time of the arrival, the Nigerian…