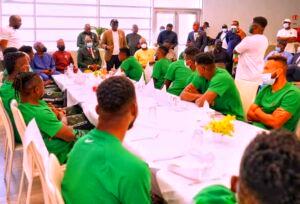 The High Commission of the Federal Republic of Nigeria in Cameroon led by the former Chief of Defence Staff, Ambassador Abayomi Gabriel Olonisakin, organised a grandiose reception for the members of the Federal Government’s AFCON delegation who were in Garoua to watch the Super Eagles engage their Egyptian counterparts in the ongoing biannual competition.

The Federal Government delegation was treated to a grand lunch before the game, and the excitement was capped with a well-deserved victory by the Super Eagles against the Pharaohs of Egypt.

As Nigeria cruised to victory in Garoua, Olonisakin promised to sustain the support for the Super Eagles and the supporters, in ensuring that Nigeria lifts the trophy at the end of the competition.

Members of the official delegation, headed by the Deputy Speaker, House of Representatives, Ahmed Idris Wase, were full of praise for the efforts of the High Commissioner and his staff, in navigating the huge logistics challenges in the…