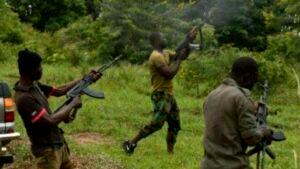 Bandits on motorbikes encircled the village of Damari in Birnin Gwari Local Government Area of Kaduna State on Sunday, causing hundreds of locals to flee.

According to a source, ” they came on many motorbikes, one bike was carrying the rider and two others. They showed no mercy. They were on rampage…it was rumoured they came on a revenge mission. “

“They were looking for members of the group Malam Abba, a very wicked and dangerous bandit leader. The Kaduna State Police Command in 2020 said they are a terrorist group, members of Boko Haram.”

“The killers  attacked the village on Sunday. They were shooting. The villagers ran away to different directions. “

“Last Friday, many bandits died when the boys of Malam Abba fought members of another gang. Those who came to Damari this morning were on a reprisal mission. They were told that Damari and environs were under the…