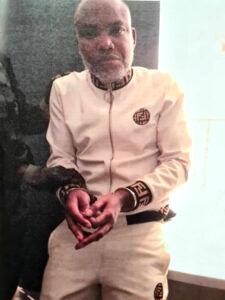 ABUJA–Foremost constitutional lawyer and human rights activist, Chief Mike Ozekhome, SAN, on Monday, appeared before the Federal High Court in Abuja to lead the defence team of the detained leader of the proscribed Indigenous People of Biafra, IPOB, Nnamdi Kanu.

In a brief chat with Vanguard, Ozekhome, said his decision to take over Kanu’s defence, was based on the fact that he is facing an incompetent charge.

“Right to self determination is inalienable. It is guaranteed under both the Constitution of the Federal Republic of Nigeria and the African Charter on Peoples’ Rights. I am here today because I believe that the charge against the Defendant is baseless”, he added.

Kanu, is expected to fresh plea to an amended 15-count treasonable felony and terrorism charge the Federal Government preferred against him.

Though the amended charge that was signed by the Director of Public Prosecution, DPP, M. B. Abubakar, was dated January 14, it was however…