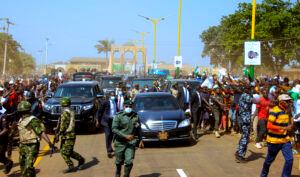 Attempt by some security officers in suits, allegedly from the DSS to deny a vehicle on Governor Nasir El-Rufai fleet to drive on the road to the new Kawo bridge soon after the President Buhari mounted the bridge, had incurred the wrath of other security agents in Kaduna who engaged them in fisticuffs.

Confusion ensued, even as superior officers quickly moved in to douse the tension.

An eye witness, Sadiq, told journalists that “there was confusion when security agents exchanged blows while President Muhammadu Buhari was commissioning the Kawo bridge in the heart of Kaduna city, on Thursday.

“After Buhari’s return from Kafacnchan, he went to commission the Kawo bridge in Kaduna but an argument among security officers…