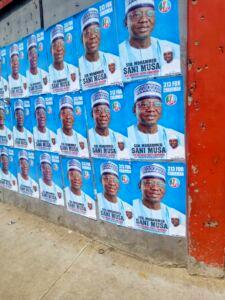 Ahead of the All Progressives Congress, APC, National Convention, Senator Mohammed Sani Musa, from Niger State posters, contesting for the position of the National Chairman of the ruling party, have flooded Imo state.

Vanguard captured the posters at different locations in the state capital as well as at the front of the Imo state government house, on Monday.

Other areas included Owerri/Okigwe road and Assumpta avenue. Also along Orlu road all in Owerri.

Since the announcement of the APC, February 26, 2022, national convention, the posters of Senator Musa, has become the first to flood the state.

Some residents who spoke to Vanguard said those who pasted the posters did it in the night and they came in their vehicles.

However, ahead of the convention, Imo state is gradually becoming tense among the stakeholders of the APC in the state, on who the Imo state governor, Hope Uzodimma, would support to vie for any position zoned to the…