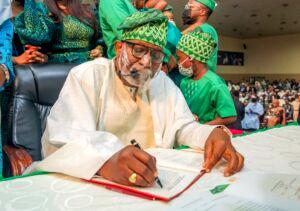 Governor Oluwarotimi Akeredolu of Ondo State, on Wednesday, received the report of the peace committee set up by the state government on the Ikare-Akoko central mosque crisis.

The News Agency of Nigeria (NAN) reports that Chairman of the committee and Chief of Staff to the Governor, Olugbenga Ale, led members to the Governor’s Office in Akure where the report was presented.

Ale commended Akeredolu for his quick intervention which led to restoration of peace to the Ikare-Akoko Muslim community.

He said that in order to ensure amicable resolution of the crisis, the committee had several meetings and consultations with relevant stakeholders and directed immediate reopening of the mosque, which had earlier been shutdown in the heat of the crisis.

The chairman, who noted that one critical finding of the committee was the peculiarity of the structure and administration of the mosque, however, expressed hope that the committee’s recommendations would…