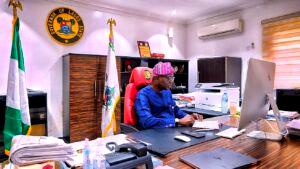 The Governance Advisory Council, GAC, highest decision making organ of the All Progressives Congress, APC, Lagos chapter, has dismissed purported report on plans to replace the incumbent Lagos State Governor, Babajide Sanwo-Olu with another candidate for the 2023 governorship poll in the state.

GAC, which consists party leaders and chieftains, therefore, urged citizens to disregard the report posted and circulating on WhatsApp platform at the weekend, purporting that the GAC, party leaders and stakeholders have settled for a replacement for Sanwo-Olu.

According to a statement by the organ, led by its revered leader, Tajudeen Olusi, the administration of Governor Sanwo-Olu is currently working daily on making the state a 21st century economy on the global stage.

The statement read in part: “The attention of the Governance Advisory Council has been drawn to a vexatious post circulating on WhatsApp purporting that the…